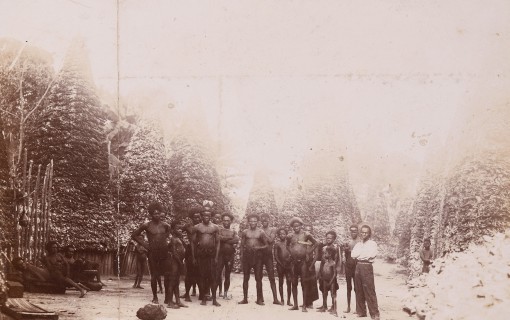 Featuring artefacts, navigational equipment, maps, photographs, personal letters and diaries, Navigating the Congo is an exhibition which explored the history of non-conformist involvement in the Congo River regions during the 19th and 20th century.

By looking at the collections held in The Angus Library and Archive, the exhibition sought to bring to light some of the challenges faced in navigating this history and the relationships that developed between Baptist missionaries and the Kongo people during the period of European colonialism.

Two talks were be held in conjunction with the exhibition:

Bandi Mbubi is a founder and director of Congo Calling, an organisation who are working to bring the world’s attention to the atrocities being committed in the Congo and for a peaceful resolution to the ongoing war. Bandi writes and speaks nationally and internationally to create a mass movement of consumers who demand the development of fair trade technology which uses ethically-sourced, conflict-free minerals from the Democratic Republic of the Congo (DRC).

Dr Rob Burroughs is Senior Lecturer in the School of Cultural Studies and Humanities, Leeds Beckett University. His publications include Travel Writing and Atrocities (Routledge 2011) and The Suppression of the Atlantic Slave Trade (co-edited with Richard Huzzey, Manchester 2015). Rob is the lead UK partner in the NWO-funded European research project ‘The Congo Free State across Languages, Media and Cultures’. Current projects include research of the Africans who testified against colonial violence in the Congo Free State.

Letters spelling the name of the steamship “Peace” that were used on the boat (c. 1890s)

Blueprint of a BMS stern-wheel launch

Diaries of the Rev. George Grenfell

Tracings of map titled The Upper Congo from sketches on the voyages of the mission steamer ‘Peace’, circa 1884 George Grenfell

Necklace and Bracelet made from leopards’ teeth, late 19th century

Photograph of victims of the Force Publique, early 20th century

Photograph of victims of the Force Publique, early 20th century

Medal of the Order of the Lion of Africa, presented to the Rev. George Grenfell by King Leopold II of Belgium, 1891

How does the colonial legacy affect the current conflict and Congolese citizens?