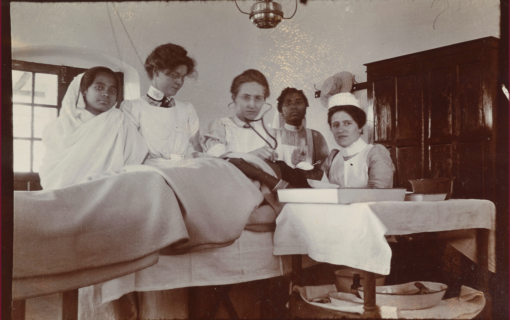 Ellen Margaret Farrer (1865 to 1959) spent most of her life living and working in India. Born in the Victorian era, Ellen travelled independently and worked tirelessly in a time during which many members of British society regarded medical careers for women as ‘unwomanly’ or ‘unnatural’.

Ellen’s father was a Baptist minister and so she was raised in a religious family. She excelled at school, gaining high grades and winning academic prizes. Her parents encouraged her to do something with the academic abilities they believed that God had given her. At this time there were very few woman doctors in Europe and her mother understood the need for more to be trained and work in countries where medical techniques, including surgery, were still underdeveloped. Ellen studied at the London School of Medicine for Women and London University becoming one of the first women in England to qualify as a doctor and travel as a medical missionary.

It was extremely hard for Ellen to gain practical medical experience after graduating as few resident hospital posts were open to women. She gained what experience she could by attending hospital clinics for children, eye and dentist departments. In 1890, she eventually obtained the post of Resident Medical Officer at the New Hospital for Women in the Euston Road. In 1891, she applied for work as a missionary doctor with the Baptist Zenana Mission in Bhiwani, India. Women were allowed to train as doctors and go abroad as missionaries, but if Ellen had stayed in England her chosen career would have been perceived as unusual for a woman. Travelling overseas enabled her to continue with her medical work and her ambition of building a new hospital.

In Bhiwani, Ellen took over a small dispensary in an Indian house. Medical aid for the Bhiwani women was essential as native customs prevented them from attending the Government Dispensary and Hospital where there was a male doctor. It was a challenging environment to work in; many patients were reluctant to stay at the dispensary for treatment and were superstitious about medical care. They were afraid of the unknown including equipment such as a clinical thermometer. There were also problems with unsanitary conditions, light and water supply. At the start, operations took place in the open air in order to get enough light. Success with first operations was vital to gain the confidence of the local people. In the 24 bed hospital, over 40 people had to be accommodated at times.

In 1923, a new and better hospital was developed with 50 beds. It was named The Farrer Hospital and Ellen spent ten years there healing, teaching and training nurses. Her work was recognised twice by the Indian Government who bestowed the Kaiser-I-Hind Silver Medal and later the Gold Medal of the same order. By the Second World War Ellen had retired and was living in England. She did, however, come out of retirement to tend to sick and injured soldiers. Afterwards, she retired once more and died in 1959.

An Elephant Ride to Chitor

Hello, from us all at the Angus. We’re back again after quite a while , but we are as busy as ever! Today on...
Read more