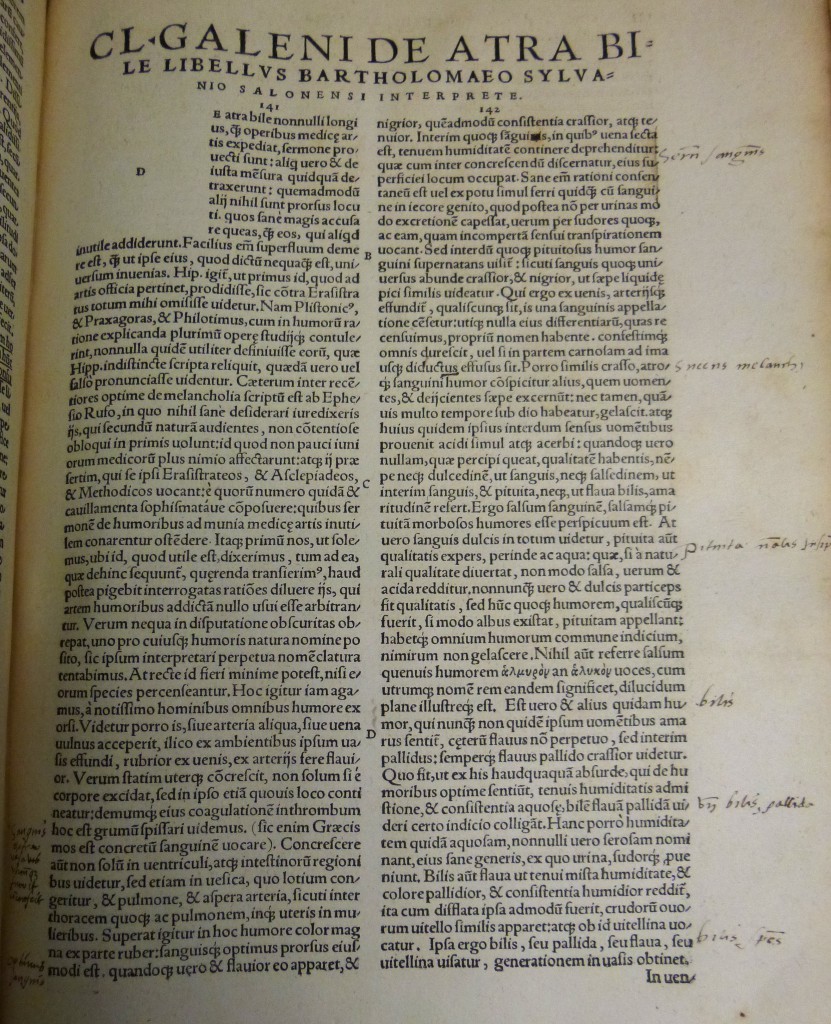 This copy of Galen has had a hard life, but a useful one.  The 2nd century Greek physician is now often mentioned only with respect to his errors (which are glaring, including continuing the theory of humour imbalance and believing that being female was a sort of birth defect), but when his work was reintroduced to European doctors in the 11th century, it was far in advance of any medical knowledge available for the previous five hundred years. His writings continued to be the apex of medical research until the 16th century, and were still widely used as a medical text books into the mid-19th century.

This Latin edition, printed in Basle in 1542, belonged to at least three English doctors during the 17 and 1800s : John Johnson, William White, and William Balfour Baikie.  As yet, nothing is known of John Johnson beyond that he was a doctor in York.  William White (1744-1790 : another Yorkshire doctor) wrote An essay on the diseases of the bile… (London : Bell, 1771), and presumably used this very book in his research.  A tiny handful of copies of his treatise remain in a few specialist libraries of medical history.

The final known medical owner was a naval surgeon of the Victorian era, who gained fame (and an entry in the Oxford Dictionary of National Biography) for his work as an explorer, topographer, geologist, and linguist of the Niger region, and of his own native Scottish islands.  While many African explorers’ writings are notable for their relation of thrilling exploits against exotic locations, Baikie’s works are serious scholarly tomes of in depth research.  This intelligent man’s most lasting legacy, however, was his pioneering use of quinine during his first Niger exploration in 1854. Before this, most expeditionary crews had lost a large number of members to malaria, and early European colonies in West Africa had been wiped out by the illness.  However, thanks to Baikie, his group remained malaria-free, and quinine’s use was rapidly adopted by all Europeans in Africa.  Now that the British army could fight off malaria, they could easily overturn West African power structures, and the fate of two continents was sealed for the next century.

Baikie’s other equally lasting African legacy was linguistic.  To this day, the Nigerian Igbo people still use the word ‘Bekee’ (a mild corruption of the explorer’s name) to refer to a white man.