Looking through some files in this strange time of working at home, I came across copies of letters written by a young man named Frank Oldrieve in the summer of 1905 . Frank was about to become a missionary in what was then known as the Congo Free State (now the Democratic Republic of Congo) and he was writing to Alfred Baynes the secretary of the Baptist Missionary Society asking for permission to take a Bioscope with him, a very early travelling film camera , so that he could visit various mission stations and take ‘Cinematographic pictures of the people and work’. Frank must have had a good idea of where the future lay in terms of the appeal of film, even though he refers to it at the time as ‘just a novelty’.

At the time that Frank went out to the mission station at Wathen, Ngombe Lutete, the people of the Congo were still enduring the brutal regime of the Belgian King Leopold II, under which  many millions died of disease, exploitation and violence. Frank would have witnessed terrible scenes and indeed many Baptist missionaries stationed there  at the time such as ,Rev A.E. Scrivener and John Weeks wrote harrowing accounts and took photographs to highlight the cruelty of the regime and contribute to the campaign to end it.

Here, Frank is a young man of 25, living in Clapham, anticipating his journey to Africa and trying to persuade Mr Baynes of the power of the movies!

People who are not interested will come and hear about Missions when there are “Animated Pictures” when otherwise nothing else would induce them to do so. This has been proved over & over again. It is also a financial success to have Cinematographic Exhibitions and I only mention one case which came under my notice quite recently where the B.M.S took £47 from the “Living Picture Section” at a Missionary Exhibition held in Lancashire.

As far as I can find out no Bioscope has ever before been taken to the Congo & I count it no small honour to be asked to take the first pictures ..the machine which cost about £50 is lent free of charge & all the Society have to pay for is the film , the cost of which would very soon be covered

Mr Baynes obviously granted permission and in the next letter from Frank ,dated August the 25th 1905, he writes:

I have this morning consulted the 2 leading Photographic dealers here -both of whom are expert Bioscope operators -& they have given me a good deal of advice as to the make of Machine & how to work it … I think we shall be able to get an Instrument, case, stand, lens etc for about £40.The films will of course be extra. When I arrive in London I will consult a well-known firm of Bioscope Makers & I will take lessons from them as to the working of the Machine….I shall also, of course, be glad to have fuller instructions as to where you wish me to go, what sort of pictures you would like to have, & whether you would like me to go off at once & visit the other stations.

Frank stayed in Wathen until 1909 when he left to take charge of a station under the Mission to Lepers in Northern India. He worked hard to raise awareness of the problems of controlling Leprosy and eventually helped to found the British Empire Leprosy Relief Association, of which he became the first General Secretary. He travelled widely in the interests of the association, until he relinquished the post due to failing health. He later became secretary to the South African Auxiliary of the Mission to Lepers and died when he was still working on the 21st March, 1948 at Mbabane settlement. 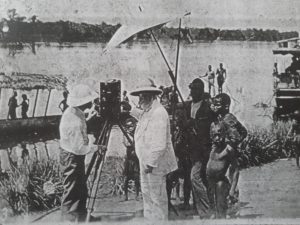