Hidden treasures, part 5. In which I realise that this diary is written by Herbert J Lorrain and was sent to his mother as a gift

First of all, today’s excerpt for your enjoyment:

As you can see from the excerpt above, there is reference to a ‘bachelor life’ at Lushai, which I have to admit completely confused me. I thought this diary had been written by a Mrs Lorrain.  Until I started doing some reading about James Herbert Lorrain and looked at other items in the archive.

I started with his BMS candidate papers.  The candidate papers we hold here at the archive can sometimes have many letters enclosed in the file, and some of them have very little at all.  Unfortunately James Herbert Lorrain’s papers fall into the latter group. 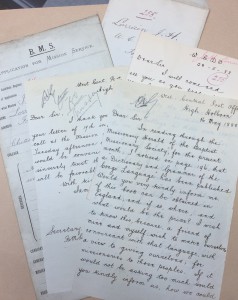 As can be seen in the photographs above, James Herbert Lorrain was rather young when he applied to become a missionary – 18 and a half – and his friend was only 16.  When they applied to become missionaries in May 1888, they were both working at the West Central Post Office in High Holborn (and could not afford to put themselves through college).  Then I compared the beautifully-clear handwriting of the journal and letters, which were certainly written by the same person. Finally, I found out that James Herbert Lorrain did not get married until 1904 to Eleanor Mabel Attkinson.  So, yes, I’ll be going back and editing the first couple of my blog posts about this diary!

I end with a rather wonderful sketch, which was most certainly done by James Herbert.