In the 18th and 19th centuries (and sometimes, even today) many Anglican churches kept small libraries of books to help vicars write sermons, and for the intellectual and moral improvement of trusted parishioners.  A great deal of information is available on these collections, both in terms of what churches collected, and who read the books. The status of parochial libraries was even enshrined in law during the reign of Queen Anne. 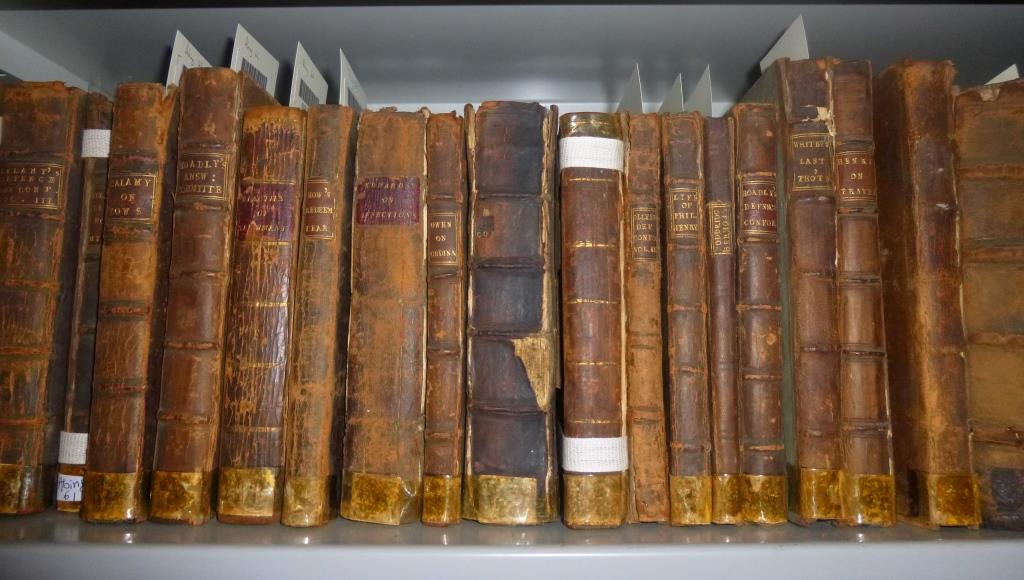 Non-conformist denominations also gathered libraries during the same era, and for the same purposes, but these collections have not been widely studied, and are long overdue some academic notice. At least three notable Baptist libraries have been preserved in the Angus at Regent’s Park College. Yhe Broughton Baptist Library remains only in part, but the libraries from Bourton-on-the-Water and Abingdon have been maintained in tact, and can be consulted here in pretty much their original form.

Cataloguing of pre-1830 books from Abingdon Baptist Church has recently been completed as part of the HLF-funded Baptist History: the Hidden Treasure of a Nation and Beyond, meaning that records of the books can now all be consulted remotely. The whole collection contains around 500 volumes (including a handful of 19th century books which will be catalogued later in the project). Some 155 items have been newly catalogued, and a further 84 records updated, meaning that there are now 489 Abingdon items on Solo. The natures of the books themselves are on the whole not particularly out of the ordinary: as individual items, and their value is not particularly high, generally requiring only 1 or at most 2 zeros in their prices. Around a dozen items are one of fewer than 10 copies in the world. None are unique. The ‘average’ book catalogued was printed in the middle of 1707, in London, in English. However, as a coherent collection, the value and interest is very great.

The Abingdon library has traditionally been associated with the hymn writer and Baptist minister Daniel Turner.  However, the books which have been catalogued recently are almost all from the bequest of the Tomkins family.  The Tomkins family were associated with Abingdon Baptist Church from its very earliest days: a John Tomkins was a member of the congregation by 1656, and later became an assistant pastor.  Wealthy brewers, and later financiers, the family continued to serve as elders, deacons and general benefactors to the Abingdon Baptists until at least the mid-19th century. 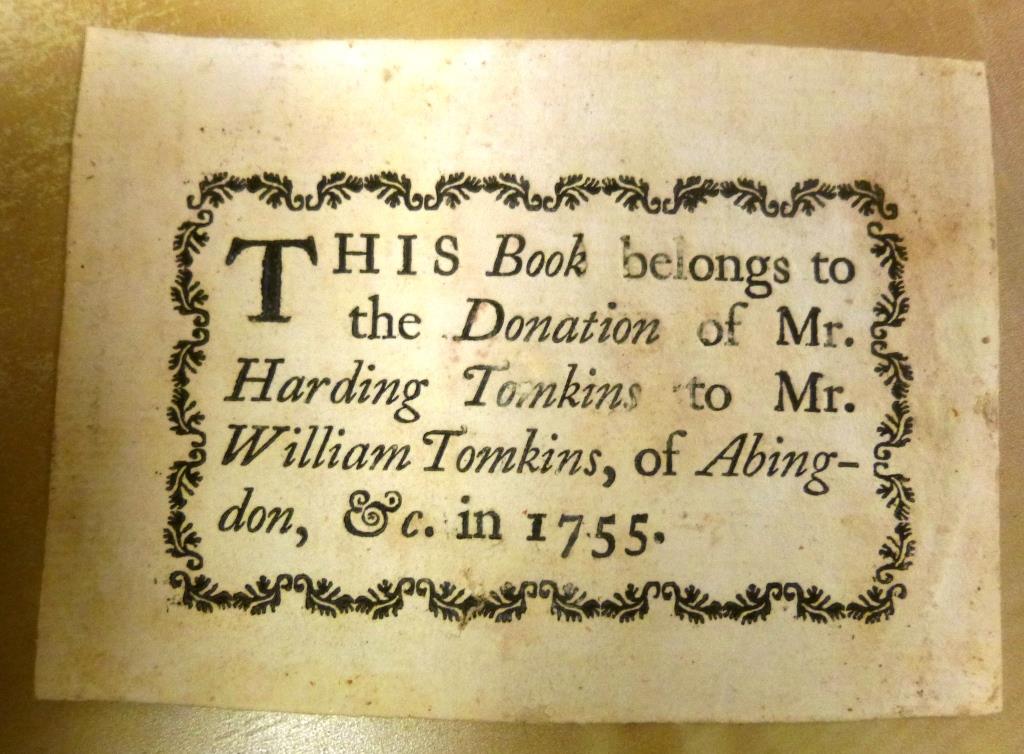 Although the bookplates specifically mention only William and Harding Tomkins, most of the books seem to have belonged to their cousin Martin Tomkins, [1] who was a Presbyterian minister in Stoke Newington until he began to display Unitarian tendencies. He was a friend of controversialist and fellow-Arian William Whiston, whose titles figure extensively in the collection.  Martin spent a good deal of his life in London suburbs in Middlesex and Essex, but was probably born in Abingdon into the Baptist family there. His books are mostly identifiable by his initials ‘MT’ written on a front endpaper, although some have his signature on the title page. Helpfully, he has usually also noted the date of his purchase, and the price he paid for the book.

There are books from a few other sources too. Some of Turner’s own books have been catalogued. Robert J Rogers; Robert Humphrey Marten; W.T. Rosevear; (all Abingdon Ministers), and Benjamin Williams of Reading all contributed to the collection in a small way.

While researching for this short article, an additional book from Martin Tomkin’s collection was discovered for sale: Bernardini Ferrarii Mediolanensis theologi De ritu sacrarum Ecclesiæ Veteris concionum (Utrecht, 1692). Furthermore, when researching why this book was not part of the Abingdon Collection an original catalogue of the Tomkin’s bequest was discovered at the Bodleian amongst the John Johnson Collection of Printed Ephemera. The Bodleian had no idea that the library described in the catalogue was still extant, or that it was housed a few hundred yards away. Having consulted the catalogue[2] in the new Bodleian rare books reading room, it was clear that the book was one of a very few strays which were not now in the Angus Library. The college has been able to acquire it and reunite it with the Abingdon Collection.

[2] A catalogue of books, given by Mr. Harding Tomkins, of Fishmongers-Hall, London, to Mr. William Tonkins, of Abingdon, in the county of Berks, &c. In October, 1755 (London, 1755) http://solo.bodleian.ox.ac.uk/primo_library/libweb/action/dlDisplay.do?vid=OXVU1&docId=oxfaleph013549111