The Apostate Baptist and the Father of English Hymns 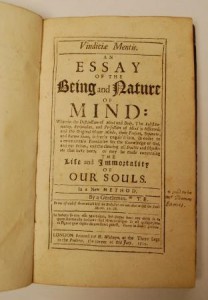 Vindiciæ mentis: An essay of the being and nature of mind: Wherein the distinction of mind and body, the substantiality, personality, and perfection of mind is asserted; and the original of our minds, their present, separate, and future state, is freely enquir’d into, in order to a more certain foundation for the knowledge of God, and our selves, and the clearing all doubts and objections that have been, or may be made concerning the life and immortality of our Souls. In a new method. By a gentleman [i.e. Thomas Emes]

This work is not in itself unusual.  24 other copies are recorded on the English Short Title Catalogue, and there are almost certainly other copies in private or uncatalogued collections.  However, the author of the book was himself unusual.  Expelled from the Baptists in 1694 for promoting heretical views (recorded in Cripplegate, London, Baptist Congregation Church Book, 1693–1723 – which is in the archives here at The Angus Library and Archive), by the time of Emes’ death in 1707, he had become aligned with an eccentric Huguenot cult known as the French Prophets.  One of this congregation prophesied at his death bed that he would undergo a physical resurrection.  However, 3 days after his death it was wisely decided to bury the putrid corpse, and the time of his resurrection was revised forward by 5 months.  The cult’s future demise was assured by Emes’ failure to appear at the appointed time. 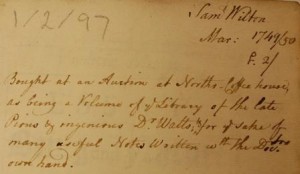 This copy of Emes’ book was owned and annotated by the rather more orthodox Isaac Watts.  Strictly speaking, he was a minister in the Independent tradition, but in the early days of non-conformity, the boundaries between dissenting denominations were rather blurred, and Baptists consider him one of their own.  A great deal of myth and legend surrounds Watts (notably the unverifiable story that he was persistently punished in childhood for refusing to speak in prose), but it is generally agreed that his work transformed worship across all denominations in England.  Prior to Watts, congregational singing had usually been confined to metrical Psalms, and direct and rather clunky translations of a handful of other Biblical texts.  Watts not only ‘updated’ the Psalms in a direct and engaging style, (such as ‘O God our Help in Ages Past’ based on Psalm 90), but also wrote didactic and meditational hymns including the perennial favourite ‘When I Survey the Wondrous Cross’.  His hymns were rapidly adopted not just by dissenting congregations, but even in Anglican circles.  As the hymnodist immodestly said of his own Hymns and Spiritual Songs: “If an Author’s own Opinion may be taken, he esteems it the greatest Work that ever he has publish’d”. 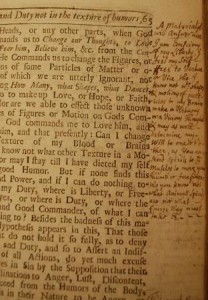